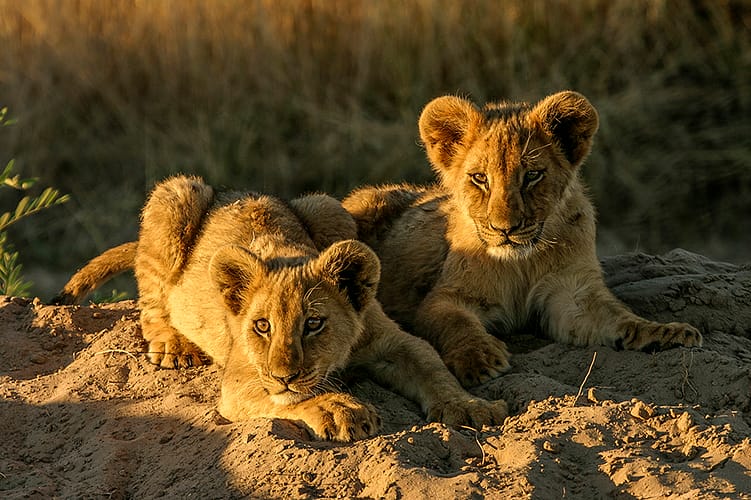 Lions in the Kalahari

In addition to the work Leopard Ecology & Conservation does on leopards we also study lions. Lions are a charismatic, umbrella species through which many other species can be conserved. As top predators they are keystone species and ideal indicators of ecosystem health. Therefore, monitoring lion populations is of crucial importance for conservation.

We use state of the art GPS collars on adult lions to allow us to easily find and observe lion prides in our study area. We currently have 10 collared females and 2 collared males in our study area. Observations allow us to assess male coalition attendance, birth rate, survival rate, and the overall health of the whole pride. Because of their social nature, the collared animals often take us to other lions that we would not otherwise see. This helps us to get more accurate population estimates than with opportunistic sightings alone.

The collars record (and send via satellite) regular positions of the collared animals which, in addition to helping us see the lions, reveals how they use the space available to them. The data LEC has collected so far has revealed that the lions in our study area are using some of the largest territory sizes recorded for lions. It has also shown us that the animals in our study spend the majority of their time alone or with one, occasionally two other adults. They rarely meet up into bigger groups.

In addition to the general ecological research described above, we have another, important, reason to monitor the lion population of Khutse and the Southern Central Kalahari Game Reserves. Lion numbers have been in steady decline for many decades throughout their range, but in the 11 years that LEC has been monitoring lions in our study area we have seen two dramatic declines. We estimate the current population size to be approximately half what is was in 2005, from 60 to 30 animals. This decline has been in due to the episodic occurrence of a disease and also to human persecution. In the course of our research we monitor both situations and hope to contribute to a meaningful conservation policy.