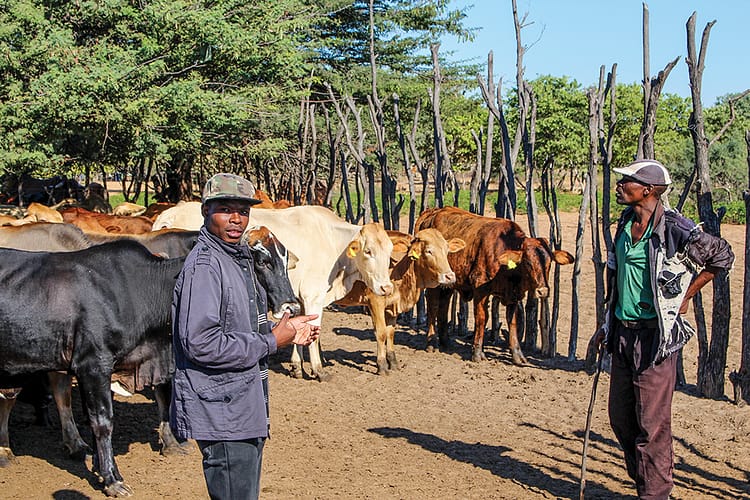 With Education to Conservation

LEC endeavours to develop a system that allows sustainable land use and coexistence between humans and wildlife in way that is supported by local farmers. Central to this is capacity building through education and training concerning livestock husbandry and natural resource management, so that farmers can improve the quality of their herd and maintain the quality of essential resources such as grazing.

The education project, which began in 2008, now employs five people to work with the farmers and herders, as well as the residents of Kaudwane, on various projects. In addition to tangible successes coming out of this project, LEC is proud of the trust we have cultivated between ourselves and local farmers.

LEC explains why attacks by large predators occur and works with farmers and herders to develop ways to minimize the number and frequency of these attacks.

The losses through leopard and lion that farmers endure are sometimes great, causing them to kill the predators to protect their livestock. In our study area, around twenty leopards were reported to be killed each year, though more may have gone unreported. Since the beginning of our project, we were able record a distinct decrease in the number of leopards killed, to around five per year.

With the help of questionnaires, LEC endeavoured to find out how the affected farmers perceive the leopards and other predators and why they take to weapons so easily. The results were astonishing. Many farmers perceive large predators as good and important in the area. Also during times with many attacks on livestock, more than half the farmers perceived the lion as a “good” animal.

Tourism is an increasingly important income source for Botswana. Therefore, some of the farmers are definitely of the opinion that wildlife, and especially large predators, must be preserved in their area. But in order to survive with their families they often don’t see an alternative to killing the “thief”.

Many farmers however, are greatly interested in alternatives, and also prepared to try these out. This is where LEC comes in. Of course, such new methods have to be convincing, inexpensive and accepted by the farmers if they are to be effective in the long term.

Our data show that the majority of attacks on livestock occur during the night and nearly always outside the cattle kraals. LEC found out that cattle returning to the kraals late in the evening stood in front of closed doors. Therefore, the idea was born to build kraals with one-way doors, which only open towards the inside and close by themselves. This project was so successful that following the test phase the farmers requested to continue with the project so that other farmers could profit from it. To date, LEC has been able to show many farmers how to build a predator proof kraal with a one-way door. This shows that improved herd protection methods can reduce the conflict between humans and lions.

Our data shows that farmers lose a substantial number of animals to diseases in a year. Many losses could be prevented through prevention and early detection.

This fact has a dual effect on the human-animal-conflict. Animals that are weakened by parasites and pathogens become easy prey for predators. Additionally, predators often scavenge from animals that die from disease, and are often mistakenly blamed for killing the animal. Animals that die from disease that are not disposed of can become sources of infection for other animals. Therefore, in addition to prevention and treatment, LEC encourages farmers to dispose of the carcasses of diseased animals.

LEC teaches farmers the most current and efficient animal husbandry methods, so that they stay healthy and thereby become economically more valuable.

In the year 2000, Monika Schiess-Meier already noticed that many horses and donkeys suffer from extremely overgrown hooves. These develop through incorrect handling, neglect and insufficient abrasion in the sand. The animals also suffered from other health problems, such as sceptic wounds caused by the constant wear of unsuitable harnesses.  Animals that are thus weakened cannot be used for their daily work and also become easy prey for large predators.

In 2004, LEC organised a school theatre, which created awareness of the sad state of these animals and possible ways to remedy this. Soon afterwards, together with horse specialists, we offered a two-day course to the villagers to explain about hoof care, attention to minor wounds and how to treat parasite infections. Since then, a team is working in Kaudwane to trim horse and donkey hooves professionally. Today LEC is still training further teams, who learn how to care for hooves and how to look after livestock. These teams are visited regularly and provided with supplementary training.

Together with the Botswana College for Agriculture, LEC began a training project for herders to impart knowledge on livestock management. We developed techniques to prevent, as far as possible, the loss of animals to disease or predators, as well as increasing the nutrition and care of the animals. As an additional benefit, this education imparts more social status to the herders.